Do items at Costco interest you, but you just don’t know what to do with them?  Do you buy them and end up throwing them away or just walk past them and wonder?

I spotted these Asian noodles in the deli section and threw them in the cart.  The first few times I just tossed a little soy sauce on them and threw them in the microwave.  This is still the 10 year old’s favorite way to eat them.
Here’s a super easy recipe just in time
for a family Chinese New Year celebration. (you can get Chinese take out cartons at Michael’s to make it even more like a party).

To change this recipe up

Items in this recipe from Costco:

How Well do You Know Your Calorie Intake?

Creating a tax on sugary drinks in an effort to fight obesity received mixed views, but ultimately didn’t pass in New York this week.

Those for the tax were supporting a healthier America.  No matter what you think of the tax you cannot fault wanting to fight obesity and disease.

Those who opposed the tax said that you cannot pin down calorie intake to beverages.  That is tough to argue as well.

How well do you know your nutrition facts?  Take this quick and fun quiz to find out.

How Well Do You Know Your Calorie Intake? » Quizzes

My job, heck my life, takes a lot of energy.  It is super important to start out with a good breakfast.  Here’s one of my favorites to get me going in the morning.  I was super surprised the first time I tried the Morning Star sausage patties.  Except that they are greaseless, I would have never known that they are meatless.  So delicious!!! 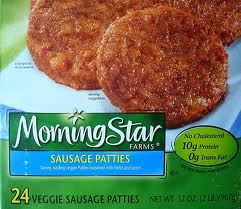 Don’t worry about those carbs.  You get to subtract the fiber count from the carb count for a new carb total.

What’s your favorite meal of the day?