Find a clock or watch with a second hand.  Now watch it for an entire minute.  Wait, wait, wait while that second hand makes it all the way around back to where it started.  That was painful wasn’t it?  The next time you tell someone “wait a minute”, remember how painful that minute watching the clock was.

A minute may seem like a reasonable request, unless you’re the one waiting.  Then a minute seems like an eternity. What are you doing that is so important?  Are you really engaged in something you can’t break away from?  If what you are doing is so important is a minute really enough, and if you do break away in a minute are you committed to giving someone your full attention or are you still distracted by what you were previously doing?

The next time you’re about to ask for a minute (an eternity) instead decide if you can give the person your full attention now or if you need them to return at a different time when you can be 100% engaged in what they want to discuss.  Both parties will feel much better about the interaction when you are both fully engaged.

The Power of Home Depot

We had just returned to the car with a cart full of groceries and my liftgate wouldn’t open.  I tried the remote, then the handle, and then I opened the driver side door and tried the button.  No go.  I looked at my daughter and said “thank goodness we weren’t at Costco”.  Since it was just the two of us it was no problem to stuff the bags in the backseat and head for home.
Weeks ago this would have been a disaster.  I would be pouting for days complaining about how inconvenient it would be to go to the dealer to get it fixed. Ah, but this is not for me.  I have found the Power of Home Depot.    Ever since buying a table saw my mantra has been
I Can Do Anything!
For the first time what would have been a do-not-attempt-this-at-home moment was an I can do anything moment.  I didn’t even consider taking my car anywhere for help.  I have found the power to try and do things on my own by starting one DIY project.  I don’t even have the project complete yet, but just the fact that I am doing it starting has been my source of self-empowerment.
Try something new.  See what else it leads to.
Where do you get your confidence?

how traditions get started

We are reading a book about detail and sweating the small stuff in our book club.  This is super important when it comes to the holidays and family tradition.  A little detail that you may overlook could be the one that they are anticipating.  We happened upon our Easter traditions by accident.
My family always hid the decorated eggs for Easter when we were growing up. I thought that this would be a great tradition to carry on when our daughter was old enough to hunt for eggs. We painted a dozen of them, and after she went to bed we incorporated a tradition from my husbands family; the outdoor Easter egg hunt.  Good thing she wasn’t aware of the Easter holiday and wasn’t expecting an egg hunt because our first kid, our golden lab Elvis, ate all one dozen of those pretty painted eggs before our daughter woke up.
The next year we still painted eggs, but we purchased plastic ones for our egg hunt. Amateurs with the plastic eggs the next morning we found that the wind had blown them all out of hiding and into the open.  Not much of a hunt.  It was more like playing a game of pick up sticks.  For a 3 year old it was fine, but we knew we had to up our game for he next year.
Loose change was the perfect answer. Kids love it and it would weigh down the eggs keeping them in hiding through the night. Yes, the perfect egg hunt.
For years we had been putting the money jar coins into the eggs without much thought to it.  Then, one Good Friday during a very hectic year (aren’t they all) the kids were babbling in the back seat and one of them mentioned he money the Easter bunny brings.  Confused, I asked “what money?”. “the money in the eggs Mommy”.  Saved!  It hadn’t crossed my mind that we needed coins for the eggs and this was the first that I realized that this was a new family tradition.
What Easter traditions do you have?

Start off your meal with a bang. Here’s a great recipe to “impress with less” that I adopted from a salad we had while in San Antonio. This is super easy to make, with only 6 ingredients, and has a lot to talk about. 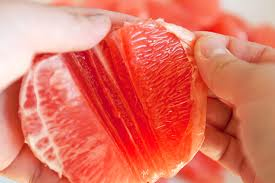 The French dressing and grapefruit is just magical together, but the real magic comes in the dinner conversation it provokes. It’s all about the cheese. Manchego comes from La Mancha Spain. Check out Linda Eder singing Man From La Mancha

Lots of brass and amazing vocals. Wow! I love this song. I have listened to her CD “It’s Time” over and over and over . . .What else, or should I say who else, comes from La Mancha? Don Quixote. 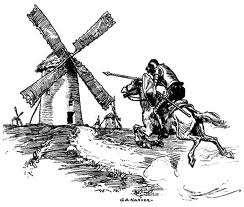 Love, seduction, chivalry and wit; what more could you want? How about windmills? There’s two ways to take the conversation from here. You can go traditional Don Quixote and discuss fighting your imaginary enemies (did you watch Raising Hope this week with the imaginary spiders?) or take a modern approach and discuss wind power being converted to wind energy. Don’t Forget your dinner is still in the oven while you’re having too much fun with the salad course.

Hope is the expectation that something outside of ourselves, something or someone external, is going to come to our rescue and we will live happily ever after.   Dr. Robert Anthony

Focus: Hope, a Detroit area  non-profit charity focused on the fight against racism and poverty, has a special drive in honor of one of their founders who passed away last year.  All Detroit area Art Van stores are

For weeks I have felt like I was living in a parallel universe. I could see what was happening around me. I could hear the conversations I was a part of.  I know that I was physically there, but I didn’t feel like I was really a part of what was going on. I felt like I was observing from outside. Watching my life instead of living my life.

When my hubby asked me if I wanted to join him on a business trip to San Antonio I was thrilled. I knew all I needed was a chance to slow down for a moment to get back into the groove – my groove. I had no idea where San Antonio was, except in Texas, and I had no idea what it was about, but I knew I could catch my breath there.
Imagine how super excited I was to see San Antonio. It caters to everything I love. It is all about the outdoors.  The river walk is amazing and the perfect venue for a morning run.  Yesterday I got in a 10k and I plan on doing the same route today.
And, the food!  Wow!  There is too much to choose from.  I decided it would be impossible to choose so I would leave it up to the locals. Once I found out they lived in San Antonio I hit them up for recommendations. Everyone’s first response was Bohanan’s. It was near our hotel and we had peered into the windows several times. It definitely caught our interest. It is a steak house with a remarkable menu (they have eggplant prepared 2 different ways as side options – yummy), but it is super pricey and I almost felt like the natives were recommending it because it is the most expensive place in town.
I kept at it. Asking everyone what their favorite was. Then I met Theresa.  She also recommended Bohanan’s.  As we continued talking she told me about her move to San Antonio 7 years ago and how she has memorized the boat tour message because every time her family visits they have to take the tour. Then, she told me about where her and her husband take their family to dinner when they visit. This in itself was almost enough to make my decision for me, but she went on.  Theresa described the table side preparation of guacamole and how she studies it carefully and tries to replicate it at home, but can never get it as good as theirs even though she uses oranges instead of limes just as they do.  She wonders as to how they always have perfect avocados when they are so hard to buy in the store. Then she recalls ordering a portobello tostada, something she said she wouldn’t normally order, but sounded interesting that day. The presentation of the dish was so magnificent she said that she was almost embarrassed, but fended off her family when they tried to sneak bites.
You never know when you’re talking to a stranger what bar they measure by and how it compares to your own. For example, I was listening to a radio program and a caller described taking a date to a super expensive, fine dining restaurant, and then told us it was PF Changs. I love PF Changs, but probably wouldn’t classify it this way. However, I didn’t need to know where Theresa’s bar was. I heard her passion. No one had a great story about Bohanan’s.  No one took all of their family there or marveled over the fresh ingredients. Her passion was contagious.  I couldn’t wait to share this experience with my husband. Passion didn’t just win over price. Passion won over everything.
Boudro’s was everything she described. The prickly pear margaritas were spectacular.  The guacamole was phenomenal and the service was as equally great. I had a difficult time choosing and asked my server to surprise me. He didn’t skip a beat (amazing, right). He smiled and went off and brought me the most magnificent steak ever. If you’re ever in San Antonio you have to try Boudro’s.
All emotions, not just passion, are contagious. What feelings are you spreading?
« Older Entries
Next Entries »