Skin In The Game

At a networking breakfast yesterday, someone mentioned leaving the skin on kiwi when you make 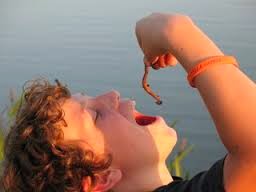 smoothies.  It just didn’t sound right to me, but then someone added “my kid eats kiwi with the skin on like an apple”.  OK, but kids eat worms too.  I still wasn’t 100% sold, but I tried it this morning anyway – you couldn’t tell they were in there.  Believe me, if anything was funky our 10 year old would have called us out.

Thanks for the great tip.

I did some research this morning, there’s actually a California Kiwifruit Organization.  I found out that by leaving the skin on the fiber value is tripled and more of the vitamin C is retained.  Hey, I just like that it’s a shortcut in the morning.