What Does Your Behavior Say About You?

As we get closer and closer to Christmas it seems almost an impossibilty to be able to turn on the TV or radio and not hear a story about a mall Santa being rude to someone.  This morning a listener called in to the radio station as she was driving to City Hall with a video of Santa
telling her child he only delivered dead Guinea pigs ?  Who hired that guy?  Didn’t he see the smart phone? We know which list that Santa is going on.

Maybe he didn’t see the video recorder, but I have always believed in the saying, your true character is determined by what you do when no one’s looking.  It recently came to play when I was waiting to conduct a job interview. . .

A few weeks ago I was standing with a Store Manager of a large retail store  waiting for a management candidate to arrive for an interview.  As the candidate walked in, the Store Manager said “I bet that’s your guy”.  He was certainly dressed like he was prepared for an interview, but what happened next said otherwise.
As he was walking through the store he never put down his cell phone. He ignored the person who tried to greet him as he entered.  As he approached us he was diligently texting away and when the manager greeted him the candidate blew him off never taking his eyes off of his phone. He wandered his way to the service counter and announced he was there for an interview. When I approached him he was oblivious to what I had just witnessed.  Seriously, all I could think of was Don Johnson’s character from the movie Tin Cup. If there had been a dog in the store this guy would have kicked it. 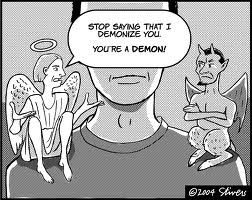 As he relayed his past experience and his skills as a leader I couldn’t mirror his words to his behavior. He described how employees enjoyed to come to work because of him not because of the company they worked for.  All I could envision was a poor employee trying to discuss a concern with him and him not looking up once from his cell phone. Maybe what they enjoyed was getting away with murder and slacking off because he never paid attention. His words said “Hire me!  I’m a capable, confident, experienced leader with a proven track record.”. His behavior said “#hire me or don’t hire me. Isn’t this #iPhone great. #jerk”
What does your behavior say about you?